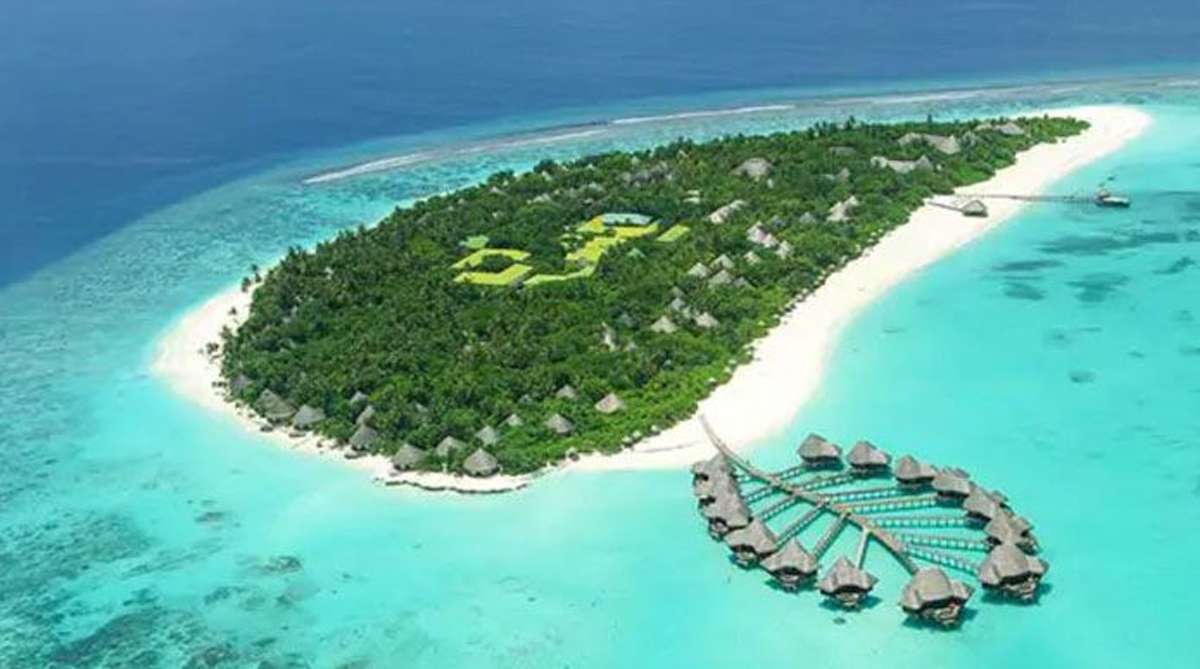 The Maldives is an Islamic republic which lies off the Indian sub-continent. It is made up of a chain of nearly 1,200 islands, most of them uninhabited. None of the coral islands measures more than 1.8 metres (six feet) above sea level, making the country vulnerable to a rise in sea levels associated with global warming. With its abundant sea life and sandy beaches, The Maldives is portrayed by travel companies as a tropical paradise. The economy revolves around tourism, and scores of islands have been developed for the top end of the tourist market. officially the Republic of the Maldives, a southern Asian chain of coral islands and atolls in the Indian Ocean. The atolls formed atop submarine mountain ridges . The island nation shares maritime borders with India, Sri Lanka and the British Indian Ocean Territory.

One of the world’s most dispersed countries is made up of about 1200 coral islands grouped into 26 atolls spread over an area of 90,000 km², that’s about the size of Portugal, or an area slightly larger than that of the U.S. state of Minnesota. But the smallest Asian country covers a land area of just 298 km², making it about the size of Malta or less than twice the size of Washington DC. The Maldives has a population of about 347,000 inhabitants (in 2015). Capital and largest city is Male. Spoken language is Maldivian (Dhivehi), an Indo-Aryan language, spoken almost exclusively on the Maldives.

The latest archaeological evidence suggests that the Maldives islands were first inhabited in around 1500 BC. It seems likely that the islands were first permanently settled by Aryan immigrants who are also believed to have colonized Sri Lanka at around the same time. Subsequent migrations from Southern India and Sri Lanka, served to further expand the population of the Maldives. Arab traders profoundly influenced Maldivian society and culture, the Maldives officially converted to Islam in 1153 AD.. The Republic of Maldives has strategic location astride and along major sea lanes. The country became a republic in 1968, three years after independence from Britain. Tourism and fishing are being developed on the archipelago.

In 1988, when a group of mercenaries attempted to take over the Maldives, the first country that President Maumoon Abdul Gayoom turned to was India. Within hours, India mounted Operation Cactus, which is still regarded as one of the most successful military interventions by New Delhi on foreign soil, and foiled the coup.

Fast forward nearly three decades, and the autocratic regime of President Abdulla Yameen has ignored repeated nudges and even a rare warning from India not to extend a state of emergency that he imposed after a showdown with the judiciary recently. Government ministers went a step further and said all outside powers, including India, shouldn’t interfere in the honeymoon islands’ internal matters.

What has led to ties between India and the key Indian Ocean archipelago plummeting to an all-time low? Commentators and Maldives watchers think one of the key reasons Yameen has ignored the world community’s calls to roll back the emergency is because he strongly believes Beijing has his back, thanks to the burgeoning growth in ties and investments from China.

India is watching the unfolding crisis in the Maldives with concern. It is mulling different options. Not doing anything is not an option given India’s stakes in a stable Maldives. Sections in India are in favor of an Indian military intervention in the Maldives. Some argue that it does not behoove a rising power with big ambitions like India to shrink away from acting robustly to defend its interests in the region.

The Maldives are a presidential representative democratic republic. Chief of state, head of government, and commander-in-chief of the Maldives National Defense Force is the president. The supreme legislative authority in the country is the People’s Majlis, the parliament. Maldives’ legal system is based on Islamic law with admixtures of English common law primarily in commercial matters. In 2008 a new constitution paved the way for first multi-party presidential elections. In October 2016 the Maldives announced to leave the Commonwealth. The constitution and other laws and policies restrict religious freedom and, in practice, the government enforced these restrictions. Restrictions were not enforced for foreign tourists on “uninhabited” resort islands.

Abdulla Yameen won a presidential election run-off in November 2013, narrowly defeating the favourite Mohamed Nasheed in a ballot which voters hoped would end nearly two years of sometimes violent political turmoil. Mr Nasheed, the Maldives’ first democratically-elected president in 2008, was forced to resign in 2012 in what he said was a coup. Political turmoil flared again early in 2018, when Mr Yameen refused to obey a court order to release nine political prisoners. The main opposition said the refusal amounted to a coup. The president declared a state of emergency. Mr Yameen is a half-brother of Maumoon Abdul Gayoom, whose autocratic rule lasted 30 years until 2008. While in office, Mr Yameen has taken steps to restrict opposition protests against his government

One can never be to certain or sure about the probable or improbable outcomes from Maldives politicians. They never fail to surprise the public with their sensational statements, side-switches or reversal of fealty to whichever side favored them. While the island nation has been at throes of fresh political decadence since the unexpected ‘hammer-slam’ from the apex court on February 1 ordering immediate release of nine high-profile political dissidents which included former president Mohamed Nasheed as well as the second vice-president of incumbent president Abdulla Yameen Abdul Gayoom’s administration; Ahmed Adeeb Abdul Ghafoor.

Furthermore the Supreme Court of Maldives had also announced the annulment of the anti-defection law on the same night; which would have meant reinstatement of a dozen lawmakers who were unceremoniously ‘evicted’ from their seats for their earlier ‘betrayal’ for swapping sides. The sudden victory for opposition was short-lived as the incumbent president wasted no time in running down all options at his disposal which finally culminated with the masterstroke of a state of emergency proclaimed on February 5 suspending as many as 20 constitutional rights and several judicature rights; which included the Criminal Procedure Act.

Following this the Maldives head of state utilized the country’s security forces to apprehended the apparent masterminds behind what was arguably a direct attempt to overthrow his administration. While many believed that the opposition had attempted to avert an autocratic grip in the Maldives governance in order to provide a narrow leeway for them to place their respective candidates for the upcoming presidential election through a devious hand-shake with the chief justice and top-court judge; the ruling party and the state claims this was an act of terrorism and a direct attempt to usurp president Yameen from his duties.

It all started off with several key opposition members finding their final venue at the corner of a dreaded jail cell during the early years of Yameen’s administration. This had included former Defense Minister Colonel (retired) Mohamed Nazim getting jailed for possession of weapons and arms; which through the use of government string-pulled media was translated to acts of terrorism as well, but vaguely thin lines of it. Former president Mohamed Nasheed was apprehended, locked, tried and finally convicted of terrorism for the offense of kidnapping a court judge. He was sentenced with a 13 year serve-time.

What happens after 23rd September?

India has expressed concern over the announcement of the Maldives presidential election with the country’s parliament and judiciary “not allowed to function in a free and transparent manner.”
“We have urged the government of Maldives to return to the path of democracy and ensure credible restoration of the political process and the rule of law before the elections are conducted,” Raveesh Kumar, spokesman of the external affairs ministry, told reporters recently.

It is important that a conducive atmosphere is created for holding free and fair elections in the Maldives. – Believes a worried India.

Since the crisis unfolded, global and regional commentary on the issue has focused on what India’s options are for intervening in the Maldives. This commentary is based on the assumption that India’s national interest are linked to Maldivian leadership. A majority of this analysis has focused on how different measures, from military presence to embargo, can help India undertake an immediate action against Yameen. India’s national interest is defined through the lens of a favorable leadership change. It is assumed that only Nasheed can realign the Maldives to India’s national interest. This assumption is not necessarily wrong, but only paints half the picture.

If nation-states are the basic units of international relations, national interest is the vantage point for available transactions between the nation-states. If a country modifies/shuns/adopts its national interest, it also automatically creates an entire new set of strategic options for itself. In case of the Maldives, instead of a leadership change, India should look at more systemic and institutional change as in its key national interest. India has an opportunity in the upcoming Maldives elections, scheduled for later this year. The Maldives has grown into a bigger headache for Indian foreign policy. A mere leadership change would not necessarily change this. Establishing rule of law, free and fair elections, freedom of opposition leaders and judiciary, and protection of interests of people of Maldives should be India’s long-term national interest in the Maldives. If India aligns to this interest, it will respond differently to following variables in Maldives.

The Maldives is a Muslim majority country. The Constitution of the country states that only a Sunni Muslim can be president. Even though Maldivian society does not have a long history of distinguishing between Shia and Sunni Muslim, this changed with the deepening of ties with Saudi Arabia in recent years. Saudi Arabia has been funding various projects in the Maldives, including universities and mosques. This has led to the penetration of a more radical and fundamentalist Wahhabi ideology. Not surprisingly, Maldives society is becoming increasingly radicalized. Organizations such as the Islamic State (ISIS) and Lashkar-e-Taiba have established ties to the country. Hundreds of men and women have left the Maldives to join ISIS. Their return and growing radicalism in the Maldives is a threat to India.

Some of the immediate measures at India’s disposal include stopping the export of essential supplies and prohibiting entry of Maldivian fishers into Indian economic zones. However, India has been against using such approaches given that such measures hurt the general citizens more than it hurts the ruling elite. Plus, experience with Nepal shows how popular sentiment can quickly turn against India and cause long-term damage. India’s external affairs minister said that “Indian Ocean carries one half of world’s container shipments, one-third of the bulk cargo traffic and two-thirds of the oil shipments, though three-fourths of this traffic goes to other regions of the world. 90 percent of our trade by volume and 90 percent of our oil imports take place through sea.” She succinctly explained the economic imperative of a peaceful and conflict free Indian Ocean. Given India’s history of maintaining freedom of navigation in the region, the world trusts India’s role.

For now, India should leverage the emergency extension to mobilize global support for its actions in the Maldives in the coming months. India should pressure Yameen to obey the Supreme Court’s judgment and convey that unconstitutional actions cannot continue. Recently, Yameen expressed his continued adherence to the Maldives’ “India First” policy. India should work with Yameen to form a custodian government until fresh and fair elections are held.

This will help India respond to another variable at play. In South Asia, countries continue to blame India for bullying, for acting as the region’s big brother. Nepal was a casualty of such an attitude. If India revives democracy in the Maldives without putting soldiers on the ground, it will be a major moral victory for India in the region. India will succeed if South Asia succeeds.